Ahhhhh, the weekend!  A time to relax and recharge… Right? 😉

We did do a bit of relaxing.  But as a single mom to a 3-year old human and an *almost* 6-month old puppy, we are mostly on the go.  But I like it that way.

Saturday started with snuggles on the couch, cartoons, and cereal.

Has anyone tried these?!  They are SO good!  And vegan!  (Side note – are there any vegans out there?  A friend of mine has been raving about how much better she feels after going vegan.  I’ve been tempted to give it a try but… bacon.)

Then we cleaned.  Exciting I know.

Piper’s idea of cleaning her room – shove everything under her bed.  I like her style.

“Golden Oldies” station playing on Pandora non-stop lately.  Anyone else think the 50’s and 60’s did it way better when it comes to music?  I think we took a wrong turn sometime in the 70’s.

Weekends are our time for adventure.  When you have a 6-month old puppy the size of a small lion, hikes are necessary.  So we geared up and headed to one of our favorite trails -Battery Point.

It was pretty icy at the start but a quick diversion into the woods took us around the ice and the rest of the trail was clear.

The best part of this trail is that it leads to the water.  Piper loves exploring on the beach and throwing rocks in the water.  And pretending to be Moana.  Anytime we are near the water she finds something to climb and loudy sings “I am Moana!!!”

That’s what was happening here-

The beach was too icy to get near the water, but it sure was beautiful!

When we got home, we got to work baking a cherry dream pie.  I’ve been craving cherry pie ever since a parent brought one to our classroom Friendship Feast back in November!  We decided not to make a classic cherry pie (mostly because I haven’t quite mastered pie crust…) so we went with this “dream pie.”  It had to be refrigerated for 4-6 hours and we were ready for bed so we haven’t actually tried it yet.  Excited for dessert tonight!

After Piper went to bed, I indulged in some #Shondaland.  Any Scandal or HTGAWM fans out there?!  Holy moly!  I don’t know how Shonda continues to shock us season after season.  But I love it!

Although, killing off Quinn was a bummer.

We are now off to hike Ripinsky before FOOTBALL!

We will be spending our afternoon cheering on the Viking’s in the NFC Championship game.  Lifelong fan here hoping and dreaming our guys can #bringithome.

One of my favorite things about Alaska – the sky.  A while back I wrote… 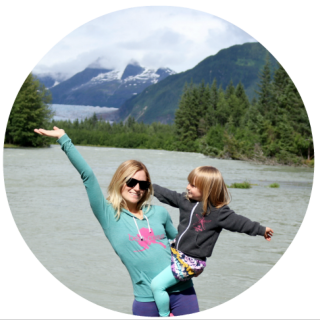